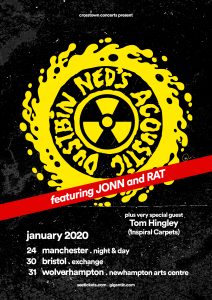 It’s nice not to be ill anymore, the trip to New Zealand was a tonic for the troops. There’s plenty in store in the Tom Hingley world in 2020, neatly enough to block out the combined buffoonery of UK domestic politics and the idiocy of Donald Trump!

A new album should be out by May, it’s an acoustic accompaniment to 2017 Tom Hingley Band ‘I Love my Job’. A new memoir based on my solo acoustic touring experiences is currently being written in hotel rooms, bars and bedrooms.

I’m doing a few support slot over the next two month , first with Neds Atomic Dustbin at the Night and Day in Manchester on Friday, Bristol Exchange January 30th and Wolverhampton January 31st.  I’m supporting Mark Chadwick at the Live rooms in Glastonbury on February 8th.

Hope to see you at one of the shows.